You are here: Breed > Knowledge > Spasm 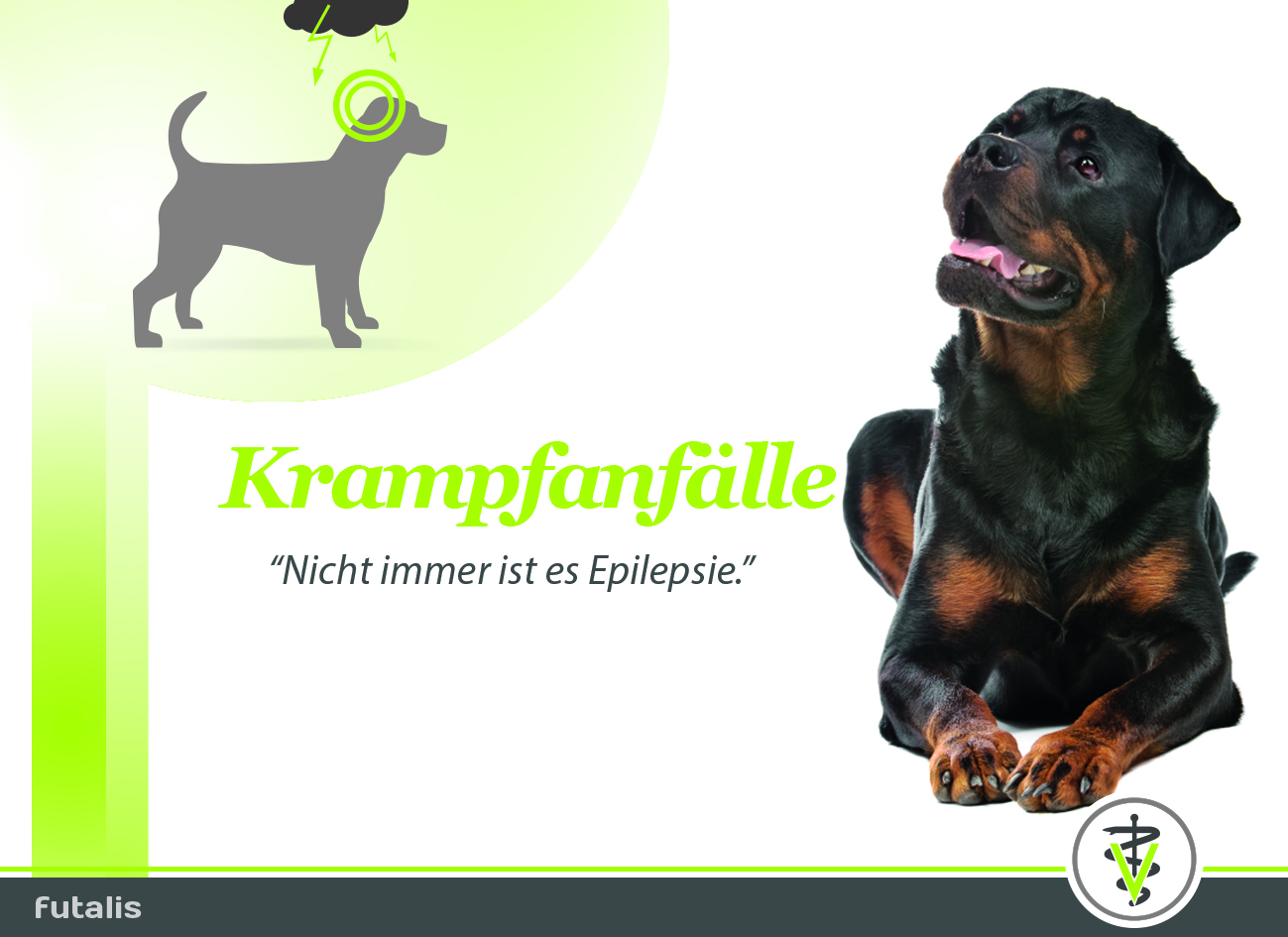 Seizures and their dietary influence

Many dogs are affected by seizures. Epilepsy is not always the cause; other diseases can also be the cause. A precise diagnosis is important in order to select the appropriate therapy and to be able to adapt the diet to the individual case.

Definition: What are seizures?

Seizures, also known as epileptic seizures, occur in different forms. The most important features are unconsciousness and uncontrolled muscle contractions all over the body. The muscles can be completely stiff (tonic cramps) or rhythmic twitching (clonic cramps). Mixed forms (tonic-clonic cramps) often occur. It is also possible to stop urinating or stopping excrement during the seizure. But other conditions can also cause a similar clinical picture, such as sudden collapse, muscle paralysis or weakness.

Seizures are often equated with the term "epilepsy". However, this disease is only one of many possible causes of seizures. One speaks of epilepsy when no organic cause for the seizures can be found. This is why they are also called "primary" or "idiopathic" epilepsy, i.e. a disease with an unknown cause. Even if the Rottweiler has no genetic predisposition and therefore does not belong to the particularly susceptible dog breeds, every single animal can still develop epilepsy or develop seizures from other causes".

Not only the primary epilepsy, but also many other causes can trigger seizures or similar conditions, for example a sudden collapse. These include diseases that can cause a lack of oxygen or nutrients in the brain, such as heart disease, cerebral infarction or hypoglycaemia. An acute calcium deficiency or a vitamin B1 deficiency, the latter caused, for example, by the feeding of raw fish, can also cause convulsive seizures. The brain or nervous system can also be directly affected by head injuries, inflammations or infections (e.g. distemper), which can lead to functional disorders.

Toxic substances that affect the nervous system can also lead to seizures. These include, on the one hand, toxins absorbed from the environment, which are contained for example in plant protection products or slug pellets, or incorrectly applied drugs. However, toxins that are produced in the body's own metabolism also play a role. These accumulate in the body, for example in liver or kidney diseases, as they are insufficiently degraded by the limited organ function and can be excreted. Seizures or other neurological deficits resulting from a liver metabolic disorder occur relatively frequently and must not be confused with primary epilepsy.

Diagnosis: Where do my dog's seizures come from?

With such a large number of possible causes, it is particularly important to determine the exact cause, as each disease must be treated differently. Depending on the type of seizure (frequency, trigger, course, duration) and the findings of the general clinical examination, the veterinarian usually already has an indication of the possible causes. Basically, a neurological examination (i.e. the examination of all nerve functions) and a blood test belong to the most important diagnostic measures. If the results of these examinations are not yet conclusive or if further seizures occur despite the initiation of therapy, further examinations are usually necessary, some of which are only carried out by specialised veterinarians or clinics. These include X-ray, ultrasound, CT or MRT examinations, spinal cord punctures (to examine the cerebrospinal fluid), EEG examinations (to measure brain waves), liver function tests, but also urine examinations. The latter can give indications of metabolic changes. However, a diagnosis of primary epilepsy can only be made with certainty if all other possible causes have been excluded by clinical or further examination.

If a seizure occurs at home, keep calm at first. If possible, the dog should remain where he is. Objects that could injure the dog should be removed from its reach. Noise and light should be reduced to a minimum or attenuated. In most cases, seizures will stop after a few minutes. If the seizure has occurred repeatedly, the owner usually has special medication to interrupt an acute seizure (so-called anticonvulsants, such as diazepam) at hand, which are usually given rectally, i.e. in the anus. Afterwards a dog needs further several hours of recovery time in a darkened and calm environment.

An immediate visit to the vet is essential if the seizure does not pass within a few minutes, if there is a suspicion of acute poisoning from external influences, and if other symptoms such as vomiting, fever, bleeding or persistent neurological deficits (such as paralysis) are added. In these cases the veterinarian will initiate a specific emergency therapy. Otherwise, it is usually sufficient to have the dog examined later in the day or the next day.

The long-term therapy depends crucially on the root cause of the seizures. Generally valid statements are not possible here. Each illness requires its own therapy scheme, which can be determined only by the treating veterinary surgeon under consideration of all available findings.

Change in diet: Can I prevent seizures?

The primary epilepsy can hardly be influenced by the feeding, here only a therapy with antiepileptic drugs can help. However, if there are organic causes for the seizures, it is possible to achieve an improvement with an appropriate diet.

Primary nutritional causes of seizures can be avoided by a balanced diet that exactly covers the individual needs of the individual animal. This can prevent deficiency symptoms such as an undersupply of calcium or magnesium. Fish should be heated before feeding because this inactivates the vitamin B1 destroying enzymes (thiaminases). Access to toxins from the environment must be prevented at all costs. Some substances in the feed, such as preservatives, are also suspected of favouring seizures and should therefore not be included in the feed.

Liver diseases are a common cause of seizures that can be influenced by diet. Both congenital (e.g. portosystemic shunt) and acquired diseases (e.g. liver fibrosis) can be considered. In order to relieve the metabolism of the liver, the protein intake should be reduced moderately and high-quality proteins with a high content of essential amino acids should be used. Thus the proteins are mostly used and hardly form toxic waste products. Highly digestible proteins are mainly found in meat, quark and soy protein. Furthermore, certain fibres (e.g. cellulose) contribute to a positive influence on the intestinal flora if they are contained in moderate amounts in the feed and thus reduce the formation of toxic metabolic products by harmful bacteria. The intake of vitamin E and zinc should be increased as these nutrients act as antioxidants and thus protect the liver cells.

Copper and vitamin A, on the other hand, should be supplied strictly as needed and not over-supplied, as they can further damage liver tissue with an increased supply. Special liver diseases in connection with disturbances of the bile flow also require a low-fat feed.

If a heart disease is present, the diet should also be adapted in addition to drug therapy. The sodium content in the feed should be reduced to prevent high blood pressure and to relieve the heart and blood circulation. Depending on the nutritional condition of the dog, the food should be very rich in fat and energy to prevent emaciation, but in overweight dogs a reduction diet should be initiated to reduce excess and weight.

If the cause for the seizures is found and is treated accordingly as well as nutritionally supported, the seizures can be reduced usually clearly or disappear completely.