You are here: Breed > Knowledge > Liver dysfunction in dogs and its influence on the feed composition

Liver dysfunction in dogs and its influence on the feed composition 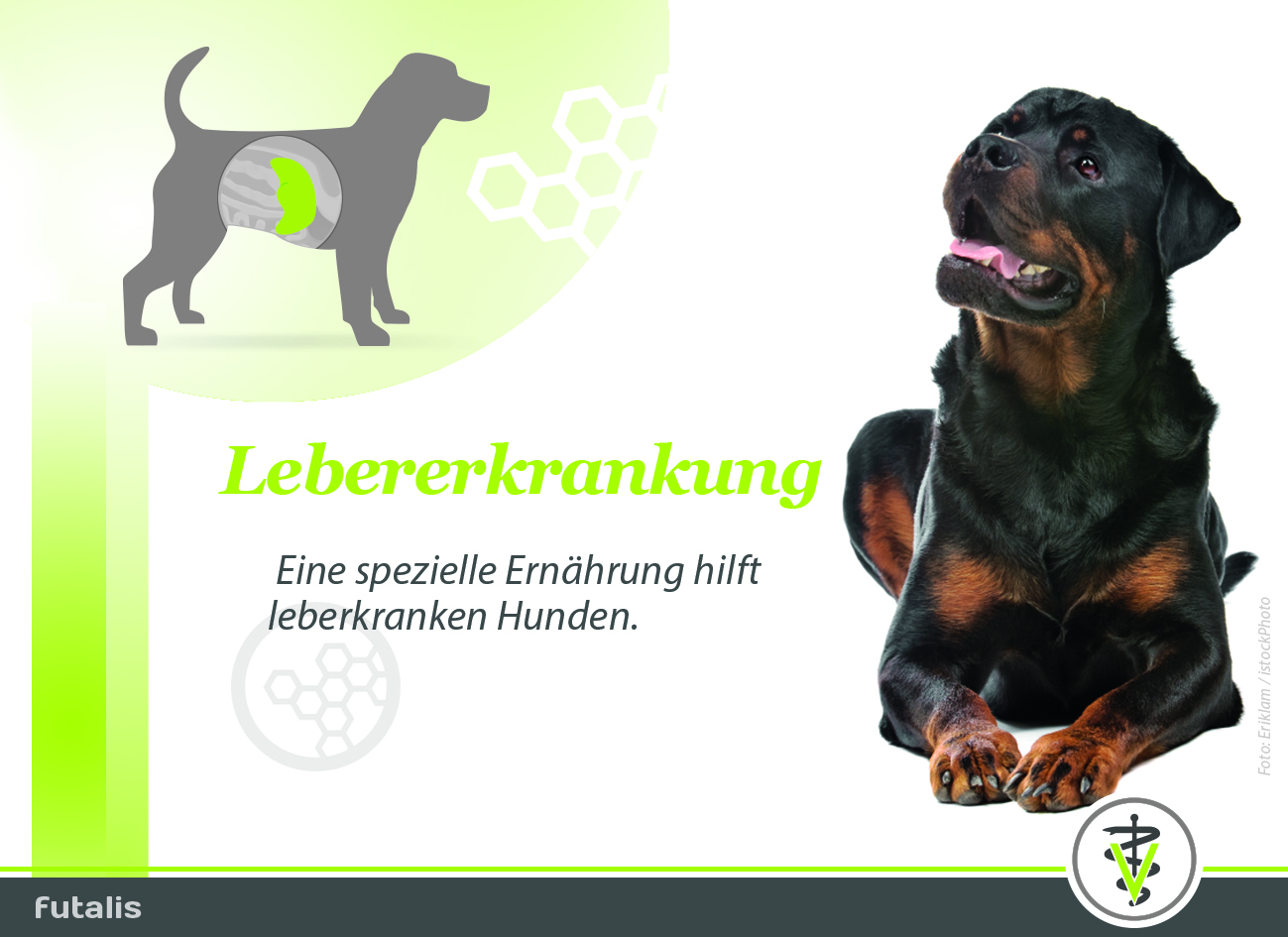 The most important metabolic organ in the dog's body is the liver. Both degradation processes of toxic substances belong to its tasks as well as the production, transformation and storage of vital nutrients. If a part of the liver tissue is damaged, the body can initially maintain its function by the healthy liver tissue taking over the function of the destroyed cells. However, if the regeneration capacity is exceeded, liver dysfunction is the result. Through a special feed adaptation it is possible to support and relieve the liver in its limited function.

Healthy liver function and consequences of its impairment

The majority of metabolic processes take place in the liver. Proteins, fats and carbohydrates are built up, broken down and converted here. The body's own vitamins are produced and stored by the liver. Toxic metabolic products and toxins absorbed from the outside are neutralised. In addition, the liver plays an important role in digestion by producing bile acids which are released into the intestines. Bile acids are required for the absorption of fat and fat-soluble vitamins from the intestine into the body's circulation.

If liver function is severely impaired, metabolic disorders occur in the body. There may be deficiencies in certain proteins and vitamins. The detoxification of the body no longer functions completely. Fat digestion can also be noticeably disturbed. However, the severity of the symptoms always depends on the type of disease and the extent of the damage.

There are many influences that can permanently damage the liver and require special therapy. On the one hand, these are congenital diseases, such as the so-called liver shunt - a malformation of important blood vessels in the liver tissue. Here not all substances circulating in the blood are "filtered" in the liver, but some pass by the liver. The consequences include signs of poisoning. The liver tissue itself is not initially damaged.

Another special liver disease is the copper storage disease. It is congenital in the Bedlington Terrier. However, other breeds of dogs can also suffer from an undesirable accumulation of copper or iron in the course of liver damage, with the corresponding signs of poisoning.

A disease of the gallbladder or the bile ducts (e.g. gallstones) can result in a disturbed digestion of fat.

In the course of a lifetime, however, infectious agents (bacteria, viruses or parasites) or external toxins such as environmental toxins, food toxins or drugs can also damage the liver tissue. Some of these lead to acute liver failure, but usually it is an accumulation of small damages in the course of a lifetime, which at some point lead to an increasing impairment of liver function.

Liver damage can be characterised by inflammation (hepatitis), connective tissue hardening (fibrosis or cirrhosis) or fatty degeneration (hepatolipidosis), the latter being very rare in dogs.

Since the liver is able to maintain its function for a very long time, diseases are usually only noticed at an advanced stage. The dogs are apathetic at first and have a reduced appetite, vomit frequently or have diarrhoea and increasingly lose weight due to a lack of nutrients. Increased drinking and frequent urination can also be observed. Depending on the underlying disease, further symptoms may appear as the disease progresses. Due to the reduced excretion function of the liver, the mucous membranes turn yellowish and seizures can occur due to increased exposure to toxins in the brain. Weakness attacks caused by low blood sugar levels are also caused by disturbances in carbohydrate metabolism. In some dogs, more water accumulates in the abdominal cavity or in the limbs, because a lack of albumin, a blood protein, can lead to a disturbed fluid distribution in the body. Blood coagulation disorders are also a sign of an advanced liver stage. On the other hand, there are no signs of pain in most liver diseases. In the case of congenital liver shunts, seizures, apathy and growth disorders usually appear very early in the puppy's life.

Diagnostics and therapy of liver dysfunction

The suspicion of a liver disease usually hardens very quickly as soon as the first blood findings are available, because the content of certain liver enzymes in the blood is increased when liver cells perish. However, in order to make an exact diagnosis and determine the causes of liver damage, further procedures such as ultrasound or liver biopsy are usually necessary.

The treatment of liver diseases is normally a purely symptomatic therapy. The remaining liver capacity is maintained by relieving the liver and supporting its regeneration. Depending on the symptoms, special infusions and drugs are used for drainage and to combat vomiting. The main focus in the therapy of liver diseases, however, is on a permanent change in diet.

A special liver diet is an essential component of therapy in cases of impaired liver function. The main goals are to ensure the supply of energy and nutrients despite disturbed digestion and to relieve the detoxification function through a limited supply of toxic substances and their precursors. Especially the proteins are to be mentioned here. Dogs need only a relatively small proportion of proteins in their food to cover their need for essential amino acids. Anything that is added must be broken down and excreted by the body. However, protein degradation products such as ammonia are highly toxic. A healthy dog's liver can easily do this job, but in case of malfunctions, the intake of excess proteins must be minimized as far as possible to avoid poisoning. Nutrients which are present in the body in insufficient quantities due to disturbed digestion and increased losses due to vomiting or diarrhoea should be supplied in increased quantities. Other nutrients that can cause liver cell damage, on the other hand, are reduced. In addition, there are some active ingredients that can support liver function and liver cell regeneration to a certain extent and thus counteract further damage.

A diet food to support liver function is therefore primarily low in protein and contains only high-quality proteins. An additional supplement with essential amino acids such as lysine or arginine can be helpful. On the other hand, inferior proteins, as contained in chewing products with connective tissue (e.g. bovine skin bones, dried rumen), hardly contribute to the amino acid supply, but only increase the burden of toxic degradation products. Their feeding is therefore not advisable for liver patients.

The energy content in a liver diet food is usually higher than in normal dog food in order to secure the energy supply and avoid weight loss. Therefore, such feeds are very rich in fat. However, it should be noted that overweight dogs, for example, make their own demands on the food. An excessively high fat content is not recommended for these dogs.

Fibres in the food that come from carrots or beet pulp have a very special effect in the intestine: they change the intestinal environment so that less ammonia from the intestine can be absorbed into the body. This toxic degradation product is thus simply excreted and no longer needs to be converted by the liver.

The content of potassium, zinc and certain vitamins (Vit. B, C and E) should be increased in a liver diet food, as these nutrients are absorbed in reduced amounts or excreted in increased amounts via the intestine or urine.

Copper and vitamin A, on the other hand, are stored in excess in liver diseases and their intake should therefore be strictly limited to the lower required value, otherwise there is a risk of oversupply. Dogs suffering from water retention also need a reduced sodium content in the food.

Milk thistle is known for its active ingredient silymarin, which supports liver function and promotes the regeneration of liver cells. The seeds of this plant can be administered as medication or already integrated into the feed. Antioxidants also help to prevent further damage to the liver cells.

However, it is important to note that every dog has its own requirements for its food ration. Because a dog has not only his liver disease, but also all other nutrition-relevant characteristics such as age, breed and nutritional status must be taken into account. So not a single liver diet food can meet the requirements of all dogs suffering from liver diseases. It is therefore important to calculate a ration for each patient, which determines the individual requirement of all individual nutrients and selects or produces a suitable food based on this.

Further topics and questions on nutrition