You are here: Breed > Knowledge > Joint Diseases in Dogs: Development, Symptomps and Influence of Nutrition

Joint Diseases in Dogs: Development, Symptomps and Influence of Nutrition 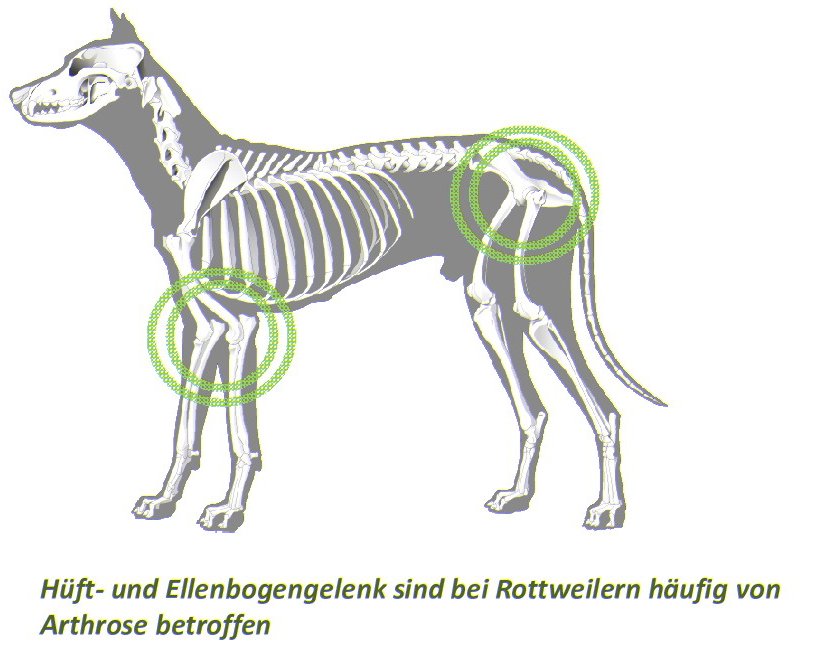 Pain when getting up, lack of movement, sensitivity to touch - painful joints can cause considerable problems for a dog. Older dogs in particular very often suffer from wear and tear of the joints, favoured by incorrect loading and nutritional problems that occur in the course of life. Joint illnesses in the age are quasi the "Volkskrankheit" of the dog. But especially with large dog breeds, bone and joint diseases can already occur in puppy and young dog age and cause malformations during growth, so that later problems are inevitable.

Structure of the joints

Depending on the breed and the joint, different types of diseases occur. In Rottweilers, these are mainly the hip joint dysplasia (HD) and the elbow joint dysplasia (ED) due to their size and rapid growth, as well as changes in the ankle joint, which can already occur in the first year of life. The so-called dysplasia is characterized by a malformation of the joint components. In the hip joint, the joint head and the socket no longer fit together optimally, which causes instability. In the elbow joint, on the other hand, various individual diseases can lead to dysplasia. A delayed ossification of various cartilage parts during growth can lead to cartilage and bone splinters. Another common problem is "Radius Curvus Syndrome", caused by different growth rates of the forearm bones, i.e. the ulna and the radius. This is caused by damage to the cartilage in the so-called growth zone of one of the two bones, which keeps it short while the other bone continues to grow in length. In addition to the formation of an "X-leg", instabilities also occur in the elbow joint. All these manifestations lead to pathological changes in the articular cartilage due to unstable loading conditions in the joint and thus to arthrosis and/or arthritis. Arthrosis is a chronic joint disease with degradation or malformation of the joint cartilage, while arthritis is an inflammation of the joint. Both diseases can occur together and cause severe pain.

The joint diseases occurring in old age, for example osteoarthrosis, are favoured on the one hand by joint malformations in young animals, but can also occur in the aging process without prior stress. Spondyloses in the spinal column area, which are characterized by the breakdown of the elastic connective tissue of the retaining ligaments between the vertebral bodies and their gradual ossification, also frequently occur in the ageing Rottweiler. As a result, the mobility of the spine is limited, especially in the posterior area, which leads to pain in this area.

In Rottweilers, many HD or ED diseases are genetically determined, which means that they occur particularly frequently in certain breeding lines and are passed on. This predisposition alone does not, however, cause the disease, but other favourable factors usually play a role. An overloading of the joints during growth, for example intensive climbing of stairs or larger jumps, can cause cracks in the sensitive cartilage tissue and thus promote joint inflammation. Especially with large and fast growing breeds, such as the Rottweiler, feeding also plays an important role. A frequent mistake in the dog nutrition is the oversupply with nutrients and a too high energy content of the food in the growth. As a result, the young dogs grow too fast, so that the bones grow quickly in length, but cannot build up the necessary stability. Cartilage and ligaments are also initially quite unstable. This results in a double burden on the body - too much weight for the respective age and also a too weak support system. The resulting problems are particularly evident in the "weak points" of the skeletal system, namely the joints. Furthermore, due to bone growth, young dogs have a higher need for the minerals calcium and phosphorus than adult dogs. A lack of these substances causes "soft" (flexible) bones with a lack of stability. This problem occurs mainly in self-prepared rations with pure muscle meat and poor mineral supplementation. In the feeding of commercial feedingstuffs, however, the opposite is rather the case, since the contents of these minerals are often still overdosed. Also an additional feeding of bones or special calcium-containing products leads to problems during growth. The increased incorporation of calcium and phosphorus into the bones makes them "too hard" and brittle. This can lead to fractures or chipping. Also the supplementation of vitamin D to a balanced feed ration leads to a disturbance of the normal ossification process during growth. In the case of young dogs, particular attention should therefore be paid to a diet that is optimally adapted to their needs. The demands during the growth change constantly, therefore the composition of the food should be continuously adapted.

Joint diseases in adult and aging dogs are often caused by changes and degradation processes of the cartilage components (e.g. glycosaminoglycans). However, an oversupply of nutrients may also lead to overweight and overloading of the joints, which in the long run leads to joint damage.

Pain in the hip joints causes an unsteady, cautious gait, problems getting up and lying down, but also hypersensitivity to touch in the affected area. As a result, the dog's well-being is impaired and its activity decreases. In the case of painful illnesses of the elbow joint, especially in young dogs, it becomes apparent that they experience sudden pain, especially in phases of overloading, and then go lame. Already puppies at the age of 5 months can be affected by the ED. In adult dogs, the pain mainly occurs when getting up, for example in the morning after lying down for a long time. After a few minutes, however, the symptoms subside, so that one speaks of a "shrinkage". Spondyloses, i.e. ossifications between the vertebral bodies, occur above all in the rear area of the spinal column and, similar to hip joint diseases, cause pain during movements, but paralysis of the hind limbs or problems with urinary or faecal heel can also occur.

Physiotherapy, for example, is used for existing joint diseases in order to maintain the mobility of the affected joints and to support the removal of inflammatory products in the joint. Furthermore, pain- and anti-inflammatory drugs often have to be used. In some cases even a surgical intervention is necessary.

In order to prevent these genetically favoured diseases, breeders select their breeds by not using preloaded dogs for breeding. In order to guarantee this, standardised x-rays of the hip and elbow joints are taken and evaluated under light anaesthesia at the earliest one year of age. Only dogs with a certain evaluation may then be used for breeding

Another factor that favours the development of HD and ED is excessive movement or overloading of the joints during growth. Therefore, Rottweilers should be active during growth and should be moved "perseveringly" to a medium extent in order to strengthen the muscles and the supporting apparatus of the joints (ligaments and tendons). However, all stronger strains such as intensive climbing of stairs or larger jumps should be avoided.

Scientific studies have shown that nutrition plays a major role in joint health during growth. The genetic, race-specific factors can only be influenced by selective breeding, but even with an underlying hereditary strain, the development of the disease can be influenced by feeding - in both a positive and negative sense. Prophylaxis is the main focus here, but in the case of affected dogs it is also possible to alleviate symptoms and improve the quality of life by adjusting the feeding even if problems already exist.

Adjustment of protein and energy intake during growth

The nutrient content in the growth must not be too high, but rather must be adapted to each development phase of the Rottweiler and should be oriented to the expected final weight. An excessive energy supply leads to premature growth. Especially with larger dog breeds this can lead to serious growth disturbances. With about 13 to 14 months Rottweiler have reached the nutrient requirement of the adult dog.

Adjustment of mineral and vitamin intake

Due to bone growth, young dogs have a higher need for the minerals calcium and phosphorus than adult dogs. However, the contents of these minerals are often overdosed in conventional feeds, which can also have negative effects on skeletal development. Depending on the stage of development of the young dog, a dry food should have a calcium content of 0.9 - 1.6 % and a calcium-phosphorus ratio of about 1.3 - 1.9 : 1, whereby these values should decrease with increasing puppy age.

In an adult dog, the energy content of the food must be adapted to the dog's needs. In addition to the weight of the dog, activity also plays an important role. In less active dogs, the energy requirement is significantly reduced compared to normally active family dogs or very active working dogs (such as service or guard dogs) or breeding bitches. This changed demand must of course be reflected in the feed ration in order to avoid overweight which is a strain on the joints. Often symptoms can only be significantly improved by adjusting the nutritional status.

are polyunsaturated fatty acids that have an anti-inflammatory effect in the body. Especially many of these fatty acids are contained in linseed oil

(alpha-linolenic acid) and fish oil (EPA = eicosapentaenoic acid and DHA = docosahexaenoic acid). Antioxidants are substances that trap "free radicals" in the body, which develop within the framework of physiological (age-related) but also pathological (e.g. osteoarthritis) oxidation processes in the body. Particularly effective antioxidants are vitamins E and C and the trace element selenium. These substances can help to alleviate inflammation and pain in existing joint diseases and promote the healing process.

Addition of glucosaminoglycans and chondroitin sulphate

Nettle is a tried and tested herb for treating joint problems. After its effect on humans has been proven by various studies, recent studies have also shown anti-inflammatory properties in dogs. The use of this medicinal plant can contribute to an improvement of the quality of life of your dog in case of joint problems.

ll these substances should already be contained in the food and should not be fed additionally. Otherwise there may be mistakes and health effects.