You are here: Breed > Knowledge > The pancreas - a small organ with a big effect

The pancreas - a small organ with a big effect 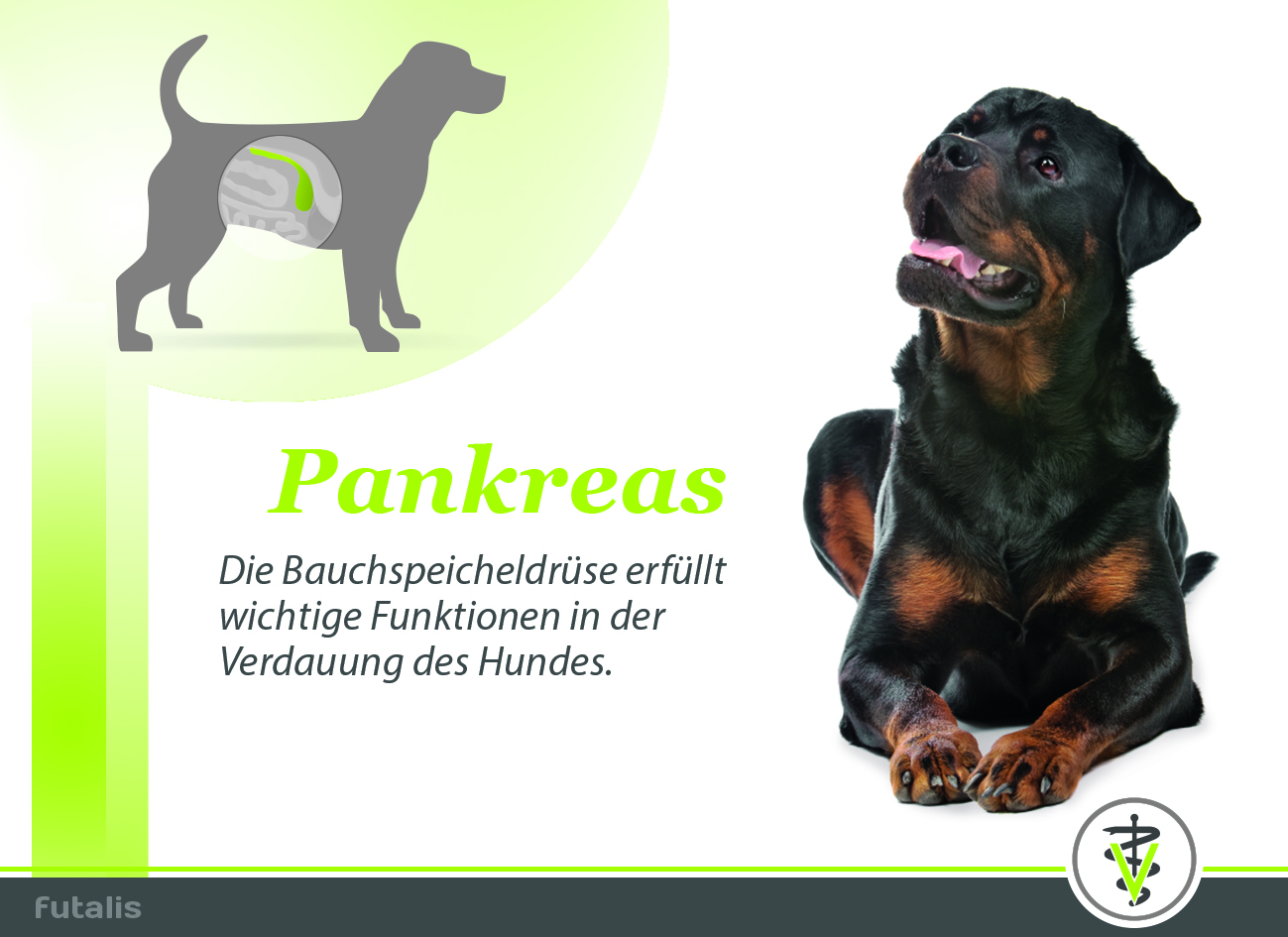 As small as the pancreas is, its importance for the organism is great. If it does not function properly, it has a profound effect on digestion and health. Read what the pancreas is all about and how it can help digestion in the event of a disease

How the pancreas works

The pancreas is a small organ located close to the duodenum in the anterior part of the pancreas and known scientifically as the pancreas. After each meal, it produces the alkaline "pancreas", which neutralises gastric acid in the intestine, as well as various digestive juices (enzymes) which are released into the intestine. A distinction is made between enzymes that are responsible for the breakdown of proteins (e.g. trypsinoge), fats (e.g. lipase), starch (e.g. α-amylase) or other complex substances. The pancreas protects itself from its aggressive digestive juices: To do this, it produces inactive enzymes that are only activated in the intestine by other substances, where they break down the nutrients in the food porridge.

Insulin-producing cells are also located inside the pancreas, but they are not functionally connected to the rest of the pancreas

Diseases of the pancreas

There are two forms of this organ in dogs: inflammation of the pancreas (pancreatitis) and hypofunction of the organ (pancreatic insufficiency).

An acute inflammation of the pancreas manifests itself in vomiting and abdominal pain. Fever, diarrhoea and apathy are also possible. Frequently, fatty food residues that have been ingested are suspected to be the trigger, less often due to the administration of certain drugs. The chronic inflammation of the pancreas, which occurs less frequently in dogs, is usually less obvious. Persistent digestive disorders tend to lead to weight loss and a shaggy coat of hair.

The risk factors for inflammation of the pancreas include obesity and disturbances in hormone metabolism. Older dogs tend to contract the disease more often than younger dogs.

The underactivity of the pancreas in dogs can occur as a result of chronic or repeated acute inflammation of the pancreas, but is more common as the sole disease in the context of pancreatic atrophy, i.e. shrinkage of the pancreas. The production of digestive enzymes is reduced - a common symptom is chronic diarrhoea. The specific nutrient deficiency leads to weight loss and a shaggy coat. The excrement is very voluminous, greasy and light due to a high proportion of undigested substances. It also smells rotten. The affected animals tend to absorb everything possible in their environment and, for example, eat excrement. However, faeces eating does not prove the existence of hypofunction of the pancreas and can have many different causes.

Some breeds of dog are genetically predisposed to a hypofunction of the pancreas. These include the German Shepherd, Longhair and Shorthair Collie and the English Setter. These dogs often show the disease already at the age of 6 to 18 months.

Although the insulin-producing cells are located in the pancreas, they are relatively rarely affected by inflammation. In this case, diabetes mellitus can develop, but it has its own symptoms and requires different treatment methods.

Diagnosis by the veterinarian

The symptoms of an inflammation of the pancreas do not prove the existence of this disease, so that various examinations have to be carried out by a veterinarian. The inflammation itself is diagnosed by various blood tests. Recently, very specific tests such as the so-called TLI or PLI value have been used, which are relatively certain to indicate inflammation of the pancreas. In acute cases, however, further examinations, for example an X-ray examination, are necessary to exclude other serious illnesses such as intestinal obstruction caused by a swallowed foreign body. In addition, various further tests may be required to assess the extent of the inflammation and the involvement of other organs. These include a large blood count and ultrasound examination.

In contrast, an underfunction of the pancreas can be detected by the clinical symptoms if the so-called fatty stool (fatty faeces) is present. However, the diagnosis should always be confirmed by laboratory tests. A specific blood test, the so-called TLI test, on an empty dog is particularly suitable for this purpose.

Therapy of the pancreas and the role of nutrition

Pain conditions in an acutely inflamed pancreas are treated with specially suitable, strong painkillers to increase well-being and ensure successful healing. If the dog is already in a bad condition and can no longer absorb sufficient food and fluids, infusions are necessary. In some cases even an artificial nutrition via a probe is necessary. This makes the supply of easily digestible liquid food possible and promotes the healing of the pancreas, since it is stimulated only in small measure for the production of digestive enzymes and can recover in such a way. Even if the animal still eats on its own, it may be necessary to administer moist food or porridge during the acute phase of the disease. If the affected dog vomits, feeding can be interrupted for 24 hours or up to three days.

In general, in pancreatic dysfunction it is important to provide easily digestible food throughout the day and divided into small portions, as the digestive capacity is limited. The fibre content should be kept low in order to ensure the digestibility of the ration and to keep the excrement volume low. The carbohydrates (starch) contained in the feed should be well digested and digestible by heating, to secure the energy supply they should be supplied in sufficiently large quantities. Proteins should be contained in moderate amounts in the feed and also have a high digestibility - this is particularly suitable for heated muscle meat, cooked egg white or lean dairy products. Poor protein digestibility can be expected with products rich in connective tissue (e.g. chewing bones from bovine skin; cartilage or tendon-containing slaughter waste) and with purely vegetable protein sources. Also poor digestibility is found in raw, i.e. unheated, feed components.

A reduced fat content in the ration can lead to a lack of certain nutrients. In order to minimise this risk, fats should be used in the diet which are particularly rich in essential fatty acids (e.g. linoleic acid) and omega-3 fatty acids

or fish oil are particularly suitable. In addition, the need for fat-soluble vitamins, especially vitamins A, D and E, increases. In addition, antioxidants and omega-3 fatty acids

can counteract inflammation in the pancreas. If there is a deficiency of vitamin K

, which can cause blood clotting disorders, this is administered by means of injections by the veterinarian. The same applies to a lack of vitamin B12

If there is a real pancreatic insufficiency, the missing enzymes must be supplied to the pancreas with food. There are various preparations in powder form which are added to the feed. They enable the breakdown of the food components in the gastrointestinal tract. The lowest possible dosage at which digestion functions well should always be determined. A high-quality and highly digestible feed ration also contributes to a healthy digestion.

Procedure after a disease

Acute pancreatitis can develop into chronic inflammation of the pancreas or heal completely. Both the chronic inflammation and the hypofunction of the pancreas usually persist for life. Accordingly, an adapted feeding should be continued for the rest of one's life. If further diseases are added later, an individual adjustment of the feed ration by the veterinarian is necessary. Altogether illnesses of the pancreas can be treated however well with an appropriate feed ration and have, as long as the nourishing references are considered, regarding the clinical symptoms a good prognosis.

Further topics and questions on nutrition