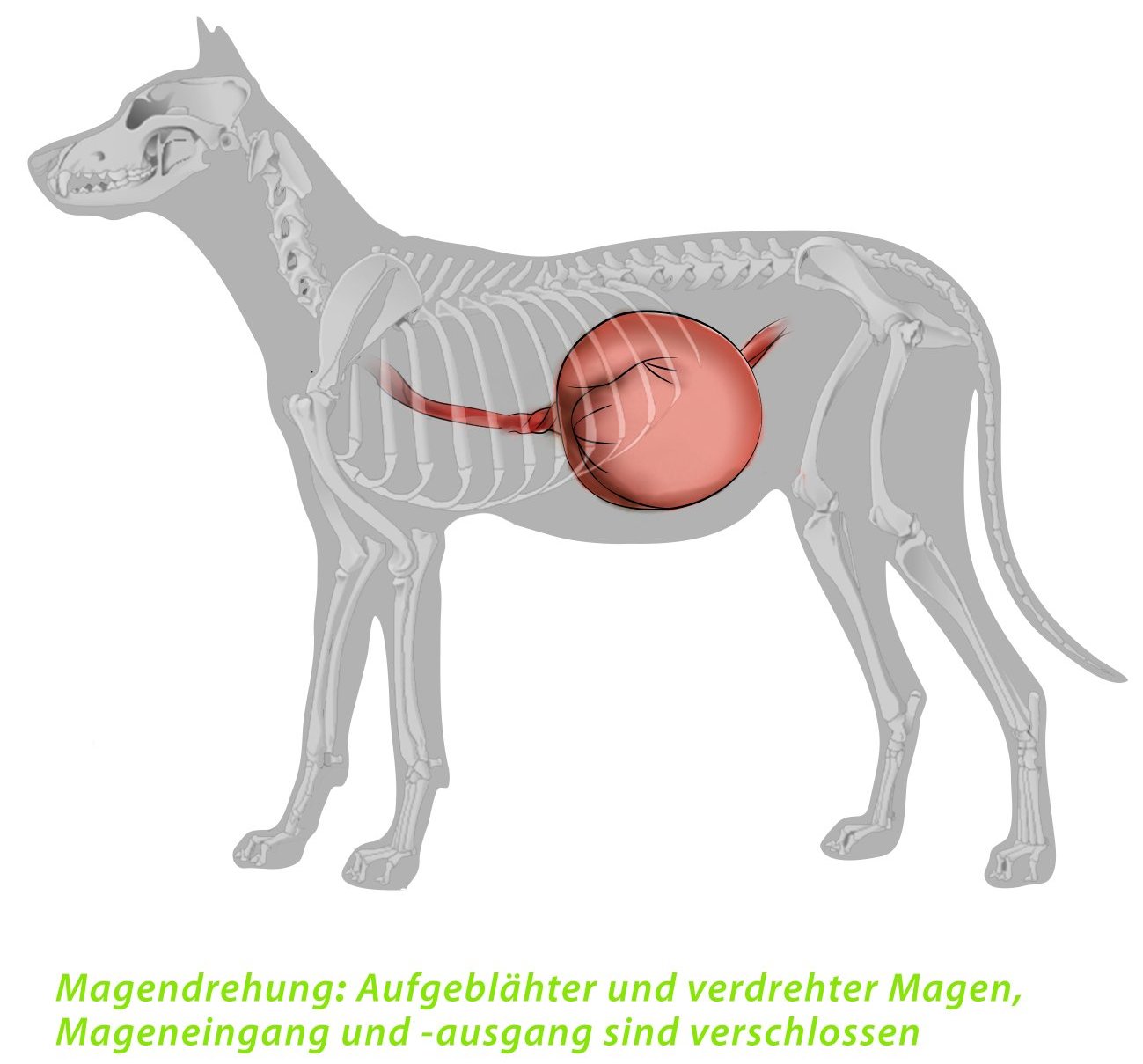 Especially large breeds - with a particularly deep chest compared to the belly circumference - are susceptible to a rotation of the stomach. Great Danes, Dobermans, Weimaraner, Irish Setter, Gordon Setter, Bernhardiner and Bassets are most frequently affected, but also the Rottweiler is predisposed by its size. The reason for this are anatomical features which allow a stronger mobility of the stomach in the abdominal cavity. This disease affects retrievers or smaller dog breeds, for example, much less frequently. Since stomach rotations occur almost exclusively after sumptuous meals, the consumption of a large amount of food is also regarded as a risk factor. Extensive exercise after a meal can also be a trigger for a stomach twist. Recent scientific findings show that the composition of the food can also have an influence on the development of a rotation of the stomach. Calcium, for example, is suspected of slowing down digestion when excreted excessively and thus contributing to a longer stay of the food in the stomach. The disease also occurs more frequently in older dogs, in stressful situations and when food is hastily slung down. However, no definite cause for this disease has been identified so far.

Symptoms of a rotation of the stomach

A rotation of the stomach is always accompanied by an increase in gas concentration, as the stomach inlet and outlet are closed by the rotation and the gas cannot escape. Therefore, the abdominal girth directly behind the ribs becomes increasingly thicker. The affected dog shows a strong restlessness, excited panting and choking, without actually being able to vomit. If the stomach and thus also larger vessels in the abdominal cavity remain strangled longer and the damage to the stomach wall continues, a weakening of the circulation is added. The dog can only lie down and is hardly responsive. Due to the strong stretching of the stomach, the stomach wall can tear and stomach contents can get into the abdominal cavity. At this stage, the disease already represents an acute life-threatening situation. Untreated, the vascular constriction inevitably results in heart failure.

Emergency aid in case of emergency

A veterinarian should be consulted as soon as the first symptoms such as restlessness, sudden bulging of the abdomen and choking appear. It is better to trigger a blind alarm than to react once too late.

Even before you set off with your dog, you should call in advance so that the veterinarian can prepare a possible operation and plan it into the practice schedule. In addition, not all veterinarians are equipped for such an operation - in this case you should immediately go to the nearest veterinary clinic, again by appointment. It is important, as in all serious emergencies, to keep calm and preferably to leave in pairs, so that one person can look after the dog and the second person can concentrate exclusively on driving the car. If you do not have your own car, you should order a taxi and inform the driver beforehand about dog transport. Under no circumstances should you visit your veterinarian on foot or by public transport, as valuable time is lost and the dog can hardly be transported lying down. The veterinarian will first degas the stomach after a reliable diagnosis - if necessary with an X-ray image. This is done either through a tube that is pushed forward through the oral cavity and the oesophagus or directly through the abdominal wall with the help of a special, thick cannula. If the stomach does not turn back on its own, surgery is necessary. Since a prolonged rotation of the stomach can lead to more serious consequences such as circulatory weakness, damage to the stomach wall or even heart failure, further measures such as infusions or an ECG for heart diagnosis are often necessary. As a general rule, the earlier the rotation of the stomach is treated, the better the prognosis - and vice versa. In dog advice books, it is sometimes recommended that the owner should perform an unauthorised initial treatment, i.e. piercing the stomach with a cannula. However, this procedure is strongly discouraged if you do not have the necessary knowledge and experience.

In order to prevent the development of a rotation of the stomach, no large meals should be fed to the genetically preloaded breeds. Instead, the daily ration should be divided into at least 3 smaller meals. If the disease has already occurred, up to 6 small meals should be fed as a preventive measure. If dry food is fed, a soaking of the food can also be meaningful, in order to prevent a swelling of the food in the stomach. Dogs that tend to snarl should be encouraged to eat slowly by using specially shaped feeding bowls or feeding toys that only release small amounts of the food. To be on the safe side, excessive romping or rolling over the back after feeding should be avoided. On the other hand, a leisurely stroll is not a problem. Since the composition of the food can also have influence, also an optimal ration composition is important. Studies point out that an excess of calcium can have a beneficial effect, so it is important to ensure that the ration is precisely tailored to your needs. If these basic rules are observed and the dog owner knows the first signs of a stomach twist, the occurrence of this disease is far less likely, and in an emergency the dog can be helped early.